There was no flying for us today, as there was too much cloud. Just as I was settling in to work in the office, I got a phone call from the boat shed asking if I wanted to go out and help Sam, the Marine Assistant with some data collection on the water.

This was by far one of the highlights my Antarctic adventure so far. I love being on boats, and was really hoping to get a boat trip in during my time here.

In the boat shed, I got kitted up in a boat suit (pretty much a drysuit). Then I went down to the wharf to board the rib, called Stella. 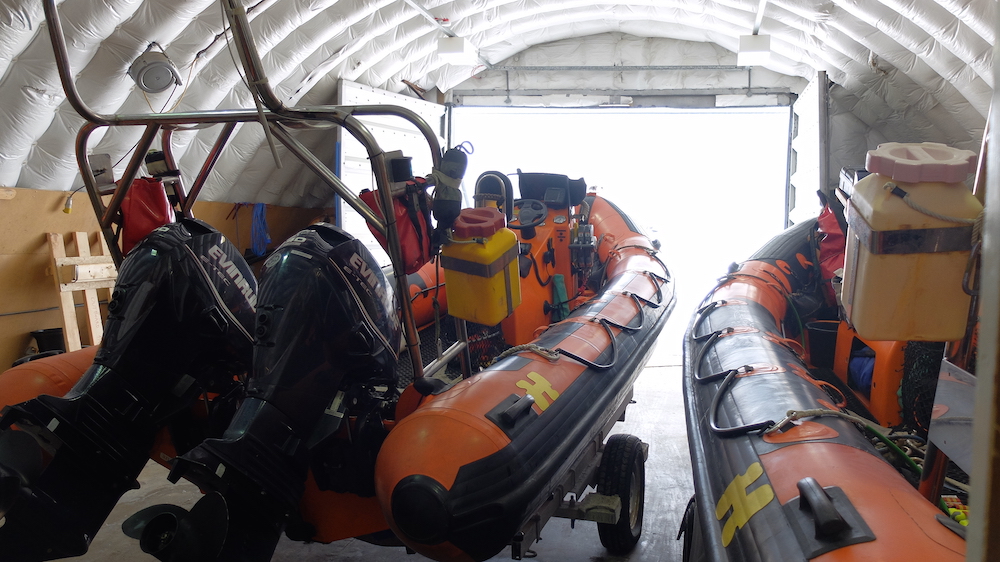 We headed out into Ryder Bay, south of Rothera Station.

There was hardly any wind and just very light snow. Once we got on the water, a bit of blue sky appeared. There was a lot of clear, thin ice around and you could just make out the edge of thicker sea ice in the distance. 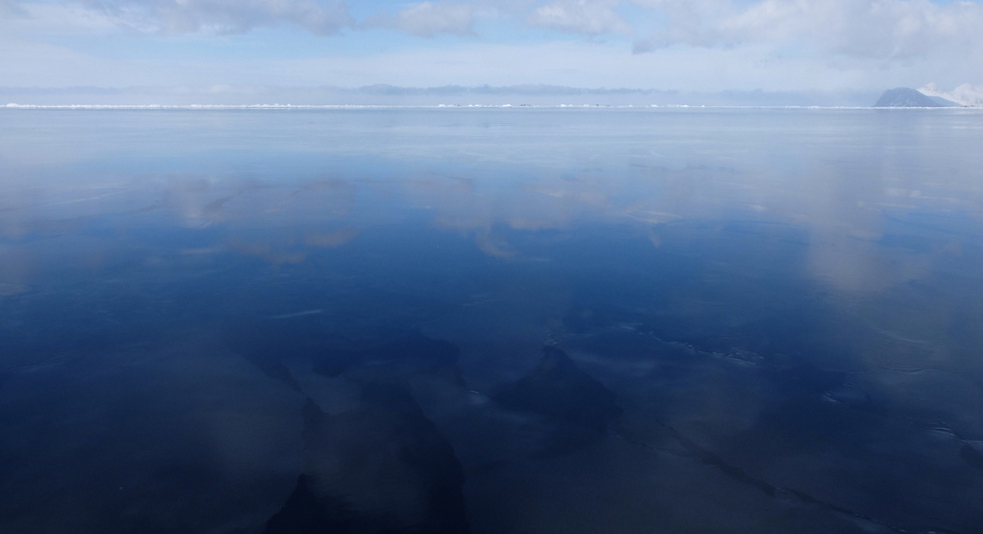 Part of Sams job is to continue a long running scientific dataset which records temperature, salinity and plankton levels in the water column at several sampling sites close to Rothera. We headed to one of these sites. This site requires samples to be taken at various intervals up to a depth of 300 metres. To do this he uses a CTD, and drops it down on a line. Once it reached 300 metres depth, it gets winched back up again onto the boat. 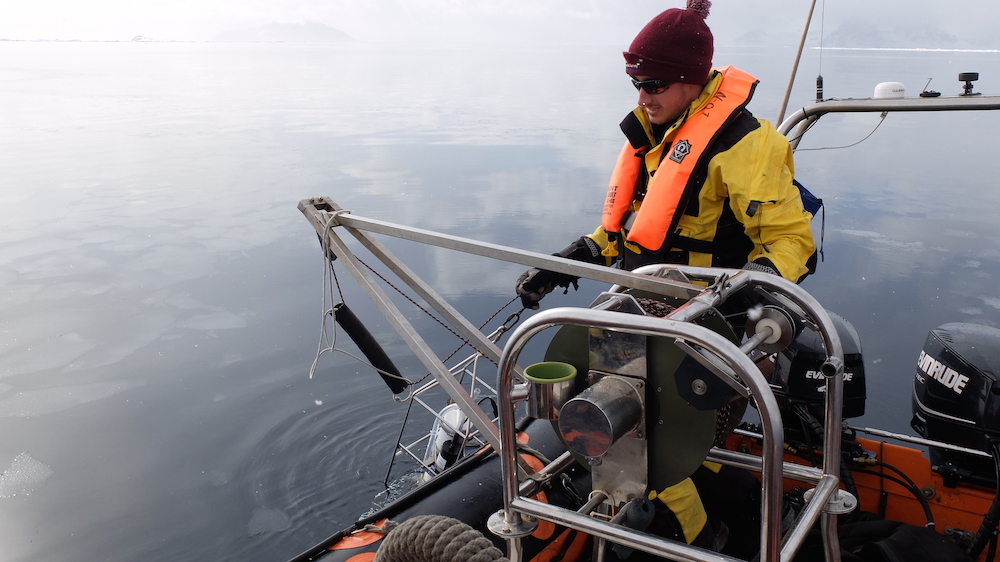 The winching is hard work. 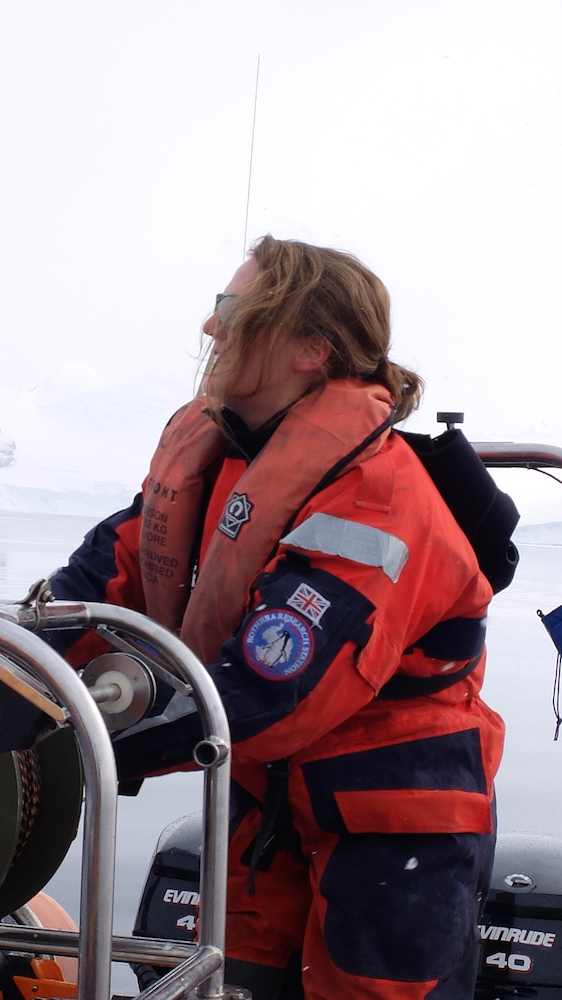 He then collected some further water samples at 15 metres depth and decantered these into some bottles. 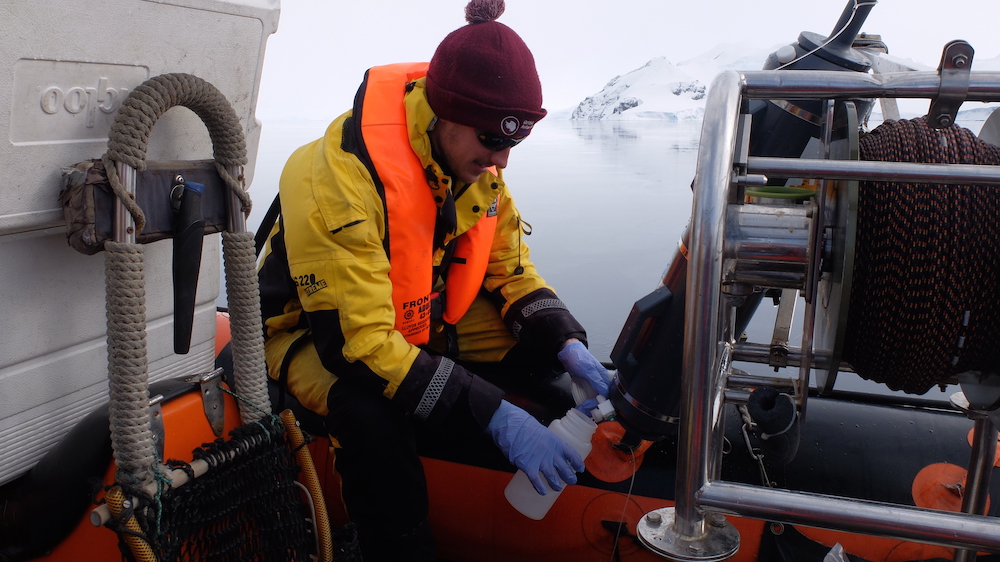 With the science over with, it was time to explore a bit, and time for me to drive the rib!

I blasted off our towards some islands and some nice looking icebergs. Slowing down a bit, I navigated our way through the floating ice. 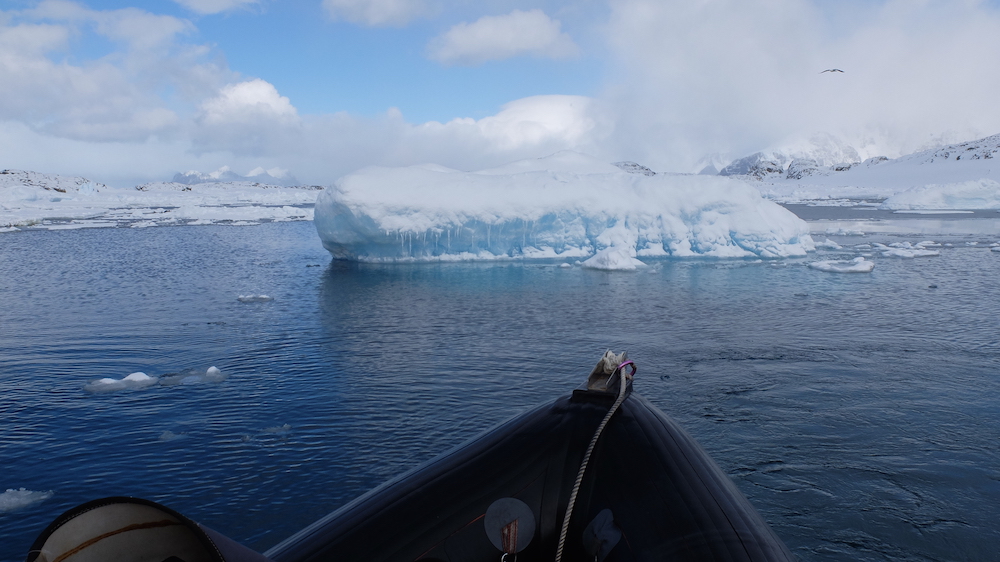 We saw an Elephant Seal on the way there. 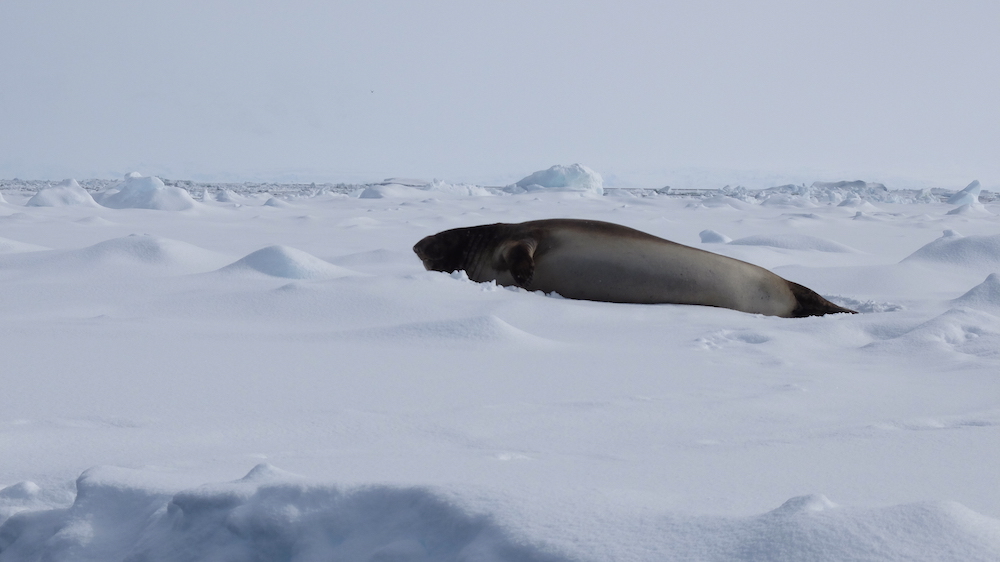 The water was so clear. When we reached a relatively shallow area, you could easily see 10 metres down. 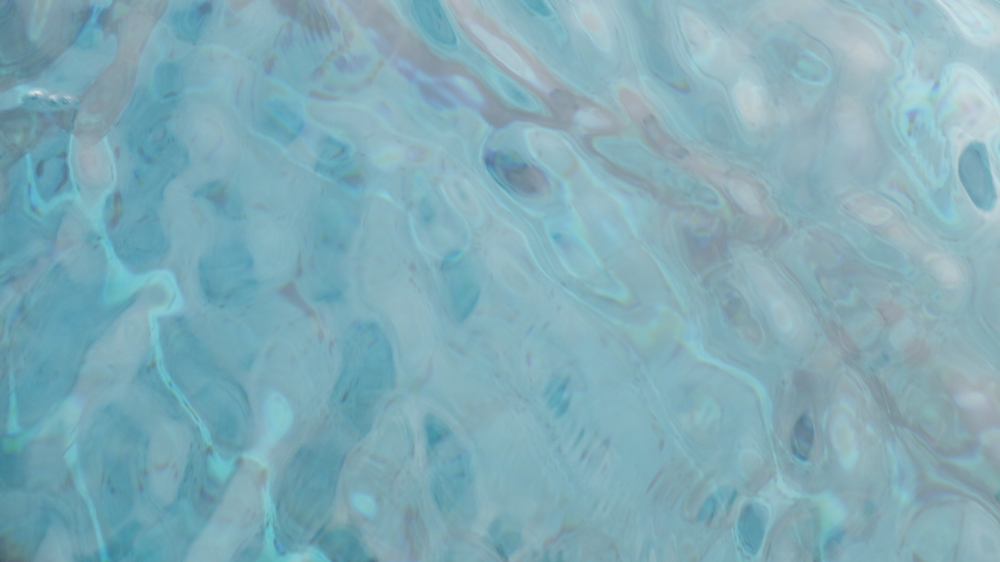 Before heading back to Rothera, we jetted out to the edge of some very persistent sea ice. There is a CTD sampling site underneath this ice, which is currently unreachable. This is where we saw some Crabeater Seals here, chilling out in the sun. 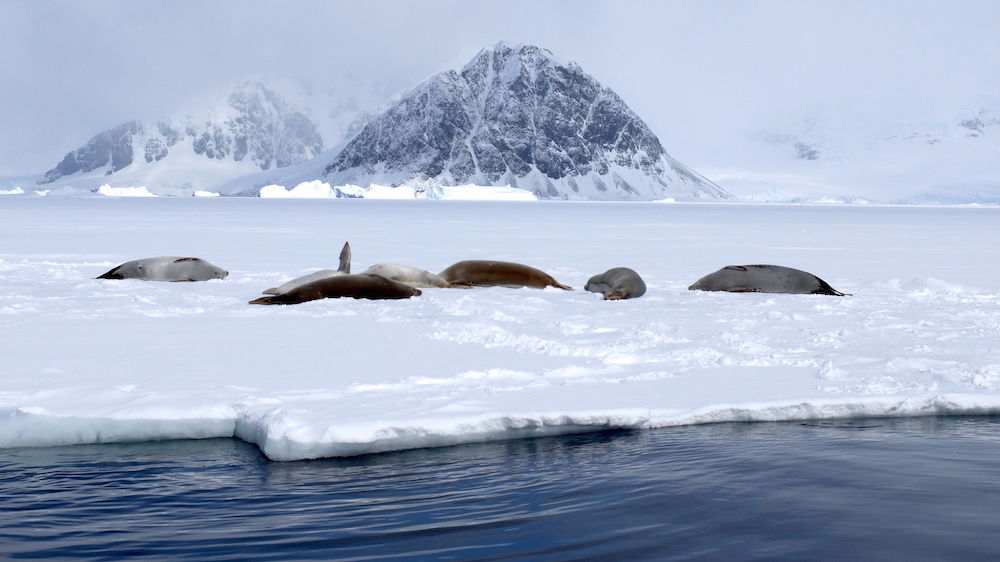 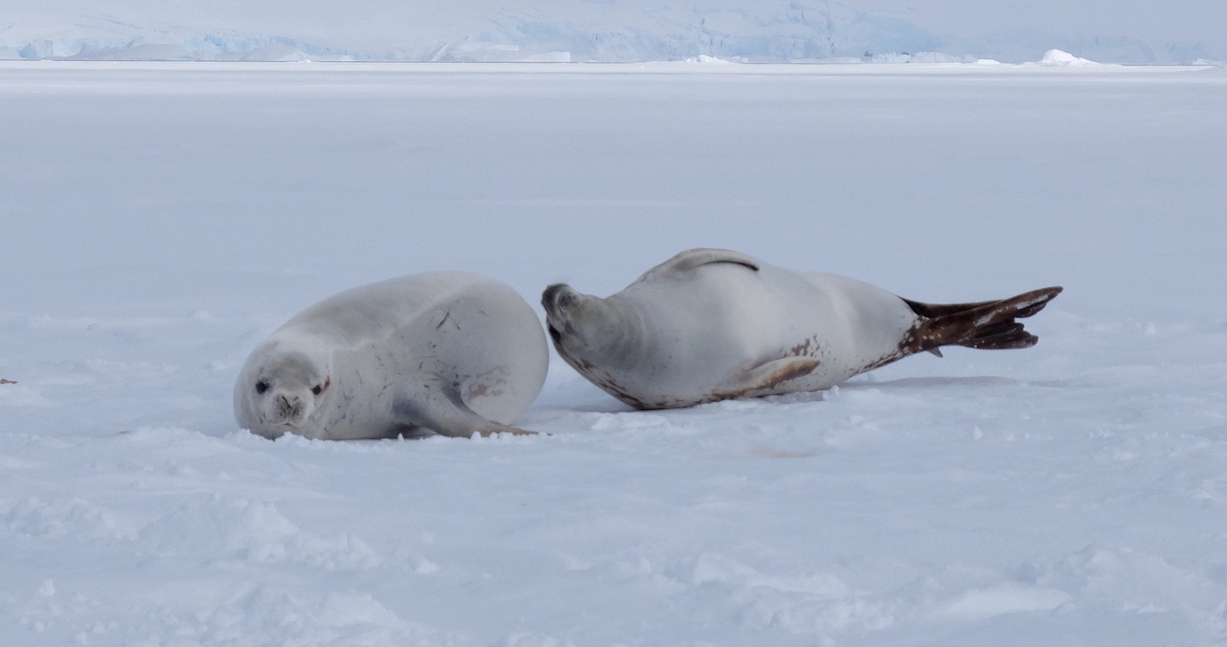 So, a great tour around Ryder Bay, seals, icebergs and boat driving. Can’t complain… We also rescued some beautifully clear glacier ice floating in the water, for Gin and Tonics.